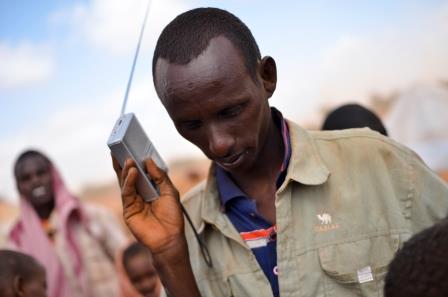 A little more than a year ago, the United Nations Food and Agriculture Organization (FAO) and the World Association of Community Radio Broadcasters (AMARC)joined forces on the occasion of the 2014 International Year of Family Farming (IYFF) to implement a series of awareness campaigns on family farming and related themes to support rural development and the eradication of hunger.

By working on the development of communication through community radio stations, the campaigns have allowed reaching and connecting with family farming communities around the issues of sustainable economic and social development.

During the first half of 2014, a global campaign was launched (read more about the global campaign here), followed by three regional campaigns in the Near East and North Africa, Latin America and Asia Pacific.

Community radios from around the world were invited to join the initiative by producing their own radio programs and sharing information to agricultural communities. These programs addressed the diversity and complexity of the issues involved in family farming: particular attention was paid to the political conditions necessary for the development of family farming and several references were made to the important role of women as spearheads of development.

The audios were produced in several languages by AMARC members and are available on the website of the NGO and in the regional platforms Onda Rural, Yenkasa Africa and ComDev Asia (in the Family Farming section). Furthermore, programs from the overall campaign and recordings of FAO Regional Dialogues on Family Farming in Tunisia, Chile and South Africa, are available online.

FAO and AMARC invite community radio stations to continue to broadcast these programs and to share them with their members to help the voices of family farmers resonate.